We have a full in-house editing suite to deliver the final product to your specification. . Specialising in carefully crafted multi-platform strategic solutions for the digital age.

All our aerial photographers are BNUC-S qualified. We take care of all of the planning and risk assessments so you don’t have to. Fully insured for Five million liability. 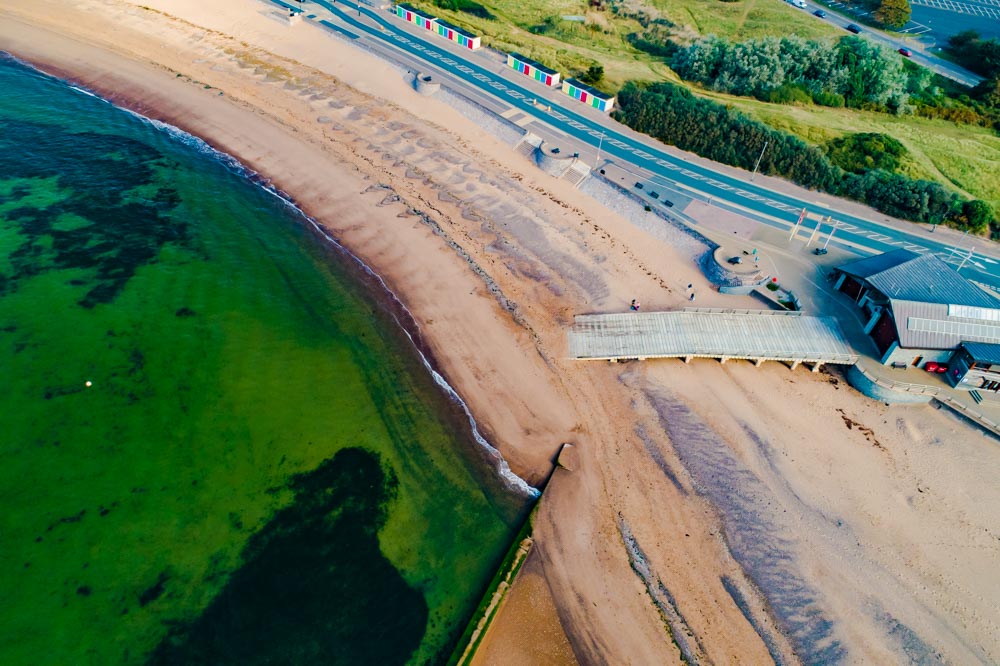 Using filters to look for the mussel beds 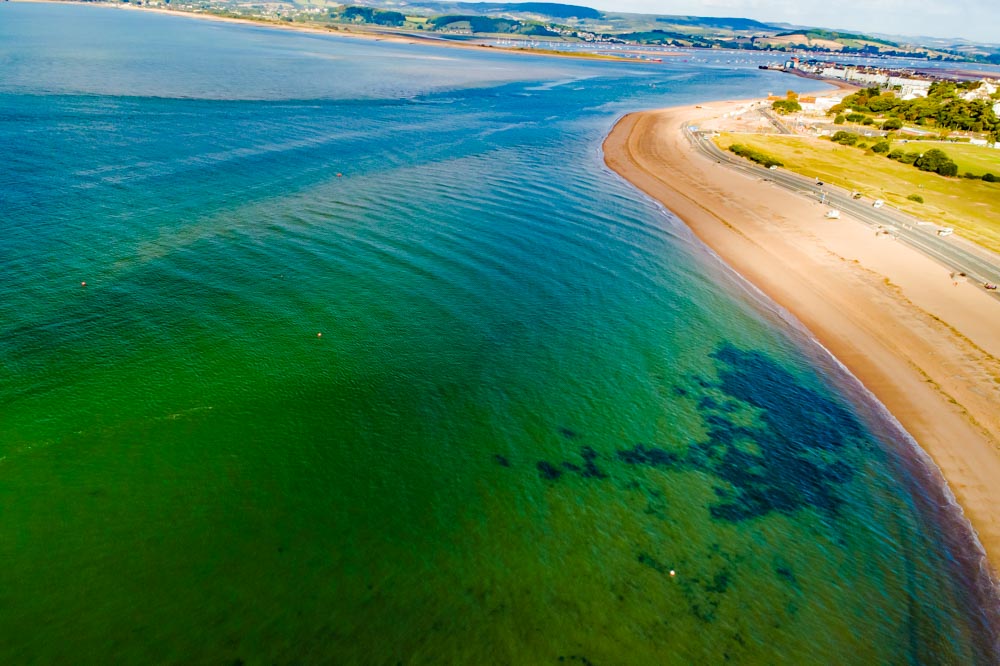 The River Dart from Air, Sea and Land

I have recently started a video blog about my love of sailing. In this episode there is some great drone footage of Dartmouth and Dittisham in South Devon

In house multi photograph stitching is included in our quotes

Multiple angle coverage for a complete coverage of your site

A classic Sail boat built by hand by one man. This is his maiden voyage in  Dartmouth

Photogrammetry of the Turf Locks in Devon

This acurate 3D model was built from a series of photographs taken by Drone. They were al then aligned to create a 3D model suitable for integration into CAD drawings. This has proved very popular in aiding planning permission as the architect can show his model as it will look like in the current landscape from all angles.

In house editing suite for a complete service

This client wanted a series of photographs for placement in his brochure. We were also able to capture video and produce this video to aid the sail of his property. We produced the video in house  with the layout to replicate his sales brochure. We can provide an end to end service from capture to delivery including uploading to Youtube. How can we help you?

We Can Airbrush Out unwanted objects In Our Photographs To Give A More Aesthetic View.

This is a series of three photographs joined together to give a high resolution photograph. All of the unwanted objects were removed. The final printed canvas was a 5 Metre wall canvas for a major company

This has had all of the cars and signs edited out

This is the original panorama shot with all of the signs and cars. 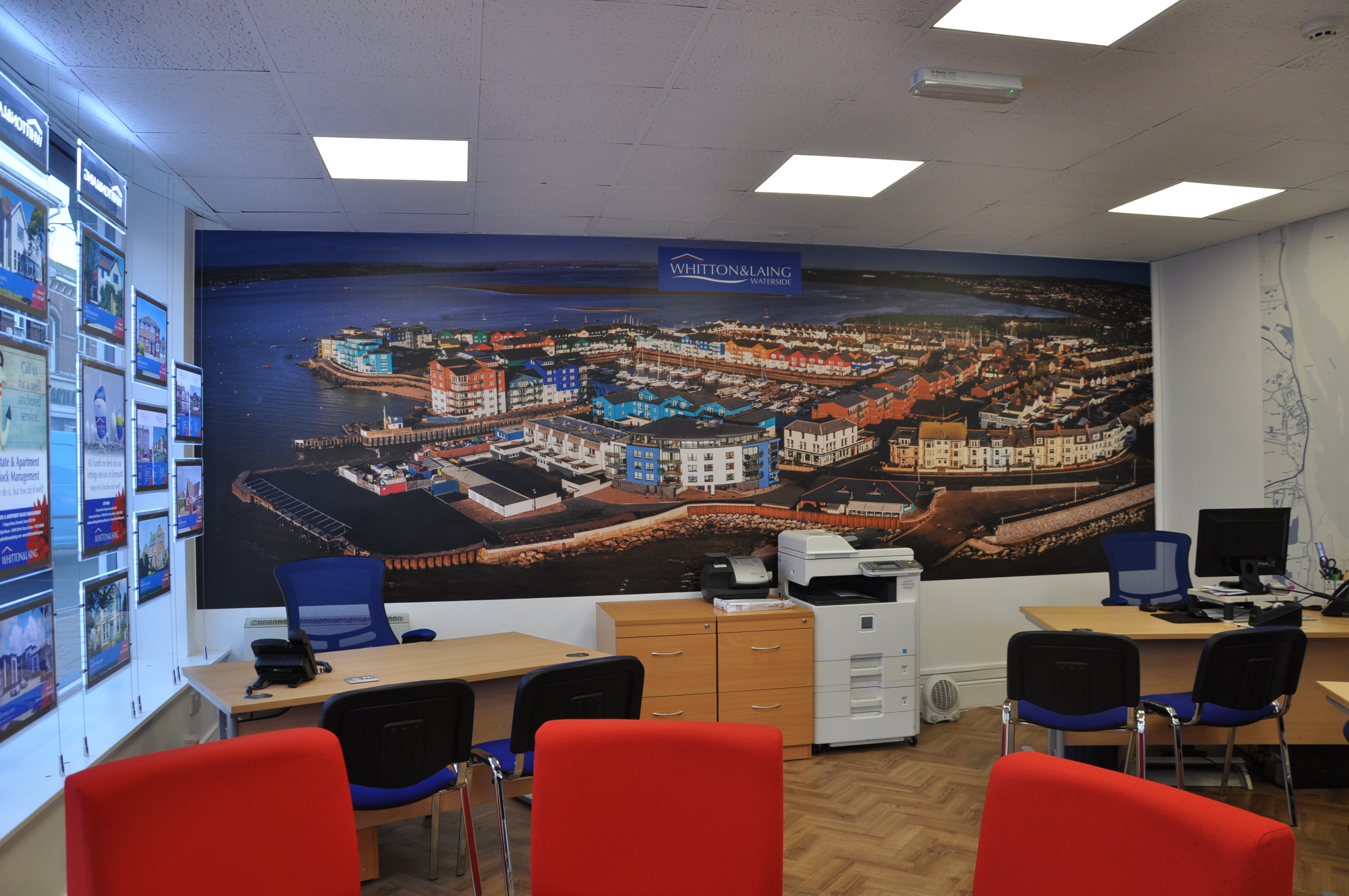 Storm damage a fast turn around is critical to prevent further damage from water ingress. 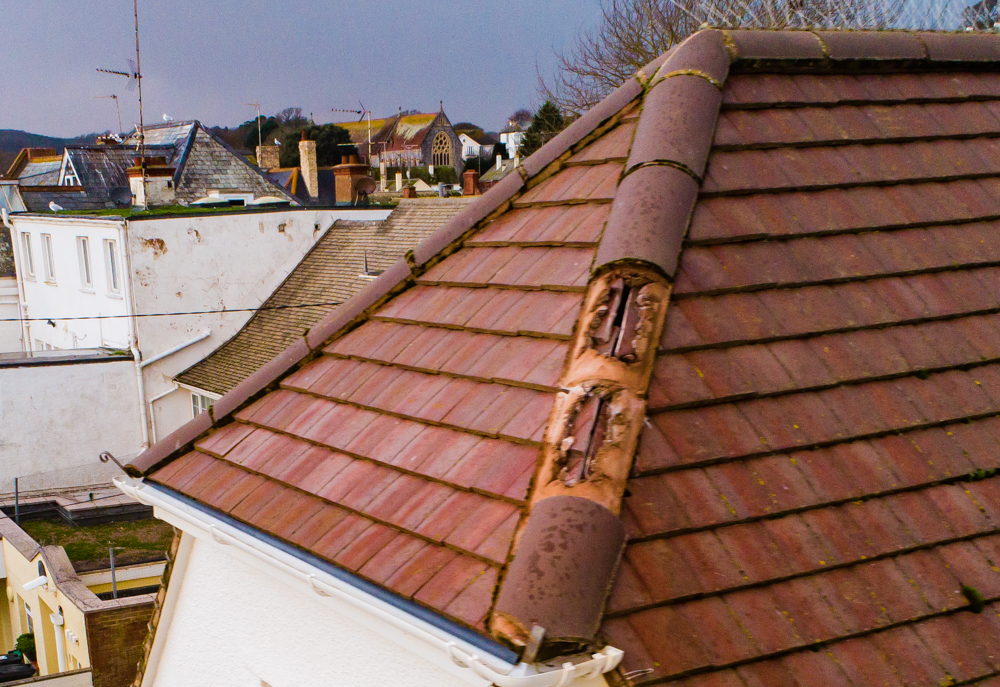 Fast turn around is critical with insurance claims.

Six hours turn around. The client had the photographs from storm damage on his desk in less than 6 hours. 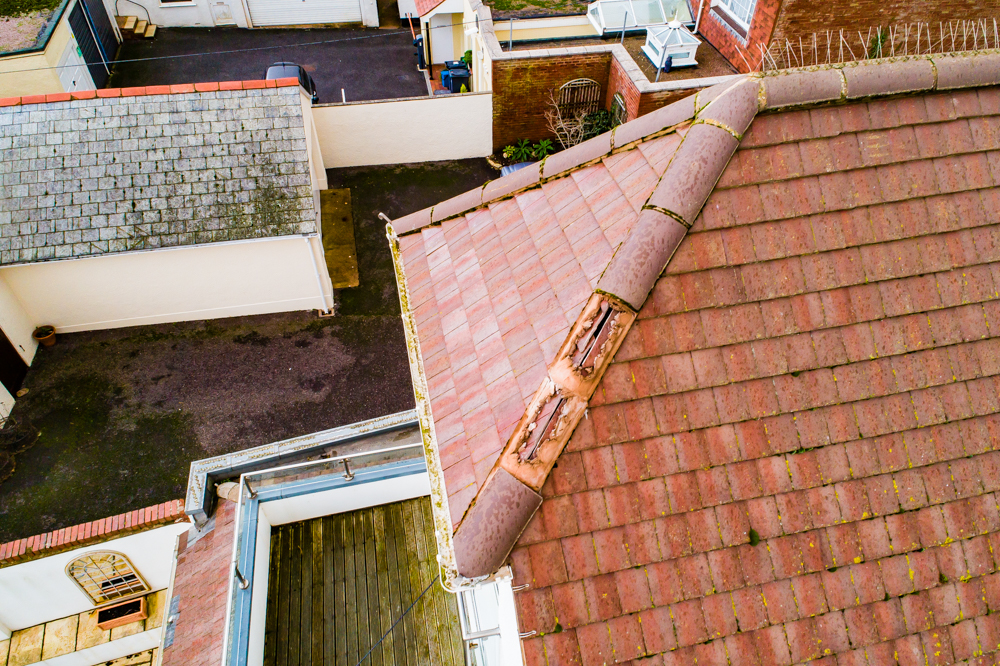 High Quality Image Capture and Post Processing are all included in our package.

Aerial photography continues to play a vital role across a variety of disciplines It is fast becoming a must have for many architects and planners.  It used across environmental management, policy implementation, planning applications and inspections Now more than ever it is part of everyday life through mapping portals, and extensive use in both printed and digital media. Many of our clients use our service to aid in planning permissions via photogrammetry. 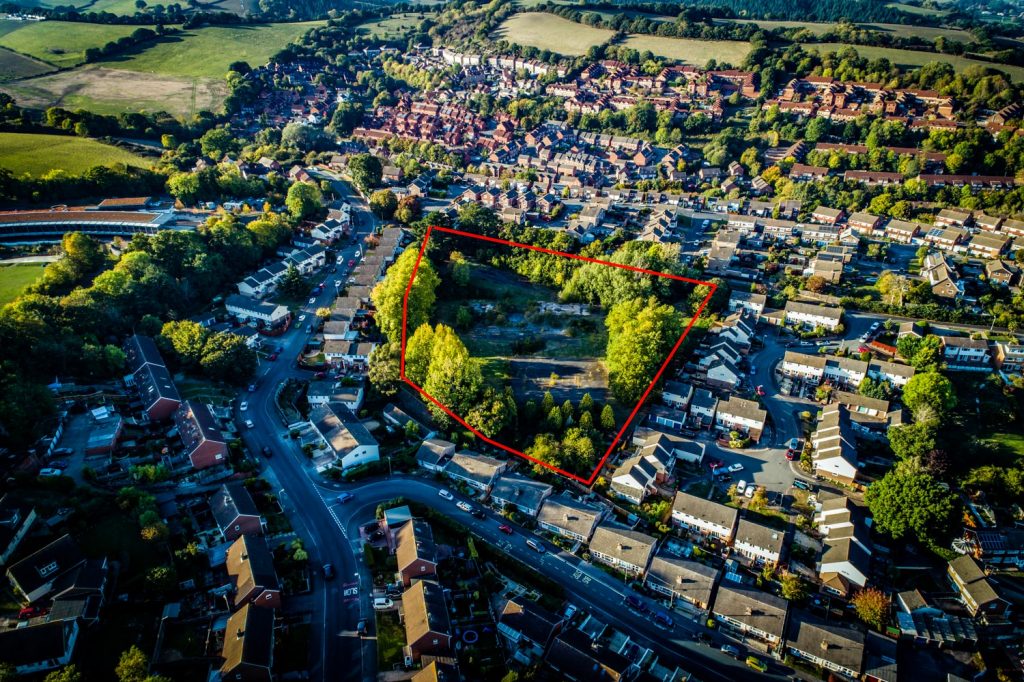 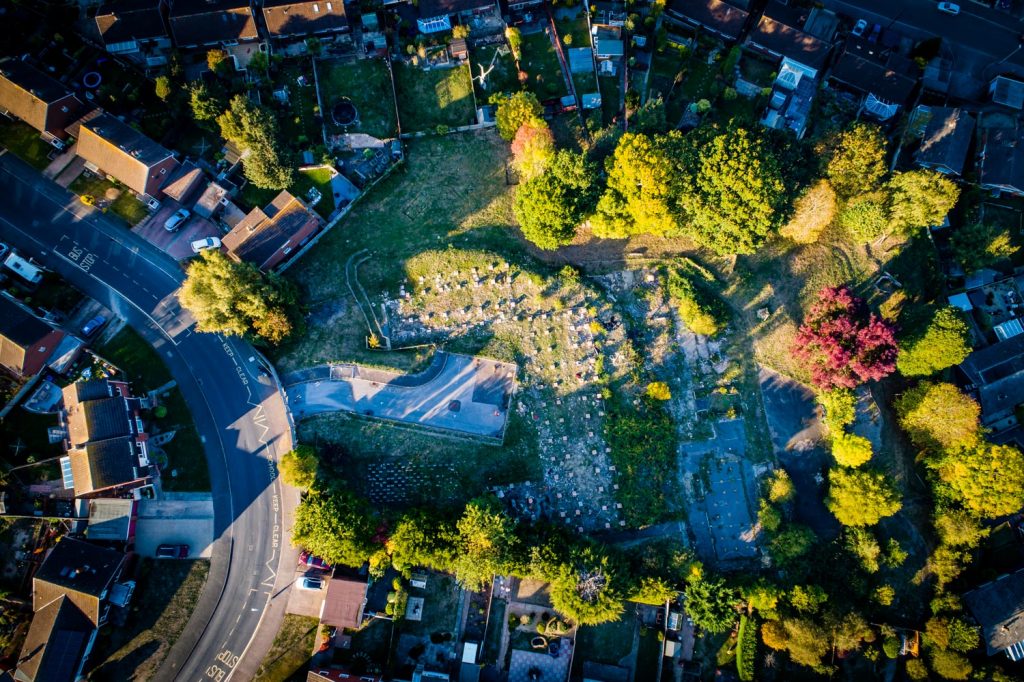 High resolution images are captured by a full frame 25mm sensor shooting in RAW format. As part of our package we post process ALL of our images in Adobe Lightroom and convert them to .jpg for the client. This ensures consistency of colour balance and image quality across all of the images.  Our Pixel resolution is: 1.25 cm per pixel at 50m & 2.5 cm per pixel at 100m. By doing this we ensure the aerial photography products and services we provide are second to none.

Make The Most of Your Weekend: Red Bull

We recently filmed local talent Olly Bridge and Guy Bridge as part of a Red Bull sponsorship. Filmed by LIam Southall as part of an ongoing project for Red Bull

The final phase of the Killerton House Roof Project. The Heart was made out off staff and volunteers who raised over £100,000 to repair the leaking roof. The heart was to say a big thank you to everyone who helped.

The aerial video was taken for Utopia Productions who filmed and produced this video as part of a case study. Many of the internal videos were done with the small UAV and helped to remove the need for a dolly.

This active 3D model was generated from over 200 images and rendered to create a 3D model. Using the latest UAV equipment we can produce a 3D rendered models. Detailed visualisations for building and planning applications can show how a new build will fit into the surrounding landscape landscape. It is also possible to insert a cad model into the 3D rendered model for full visualisation to aid in your planning permission. 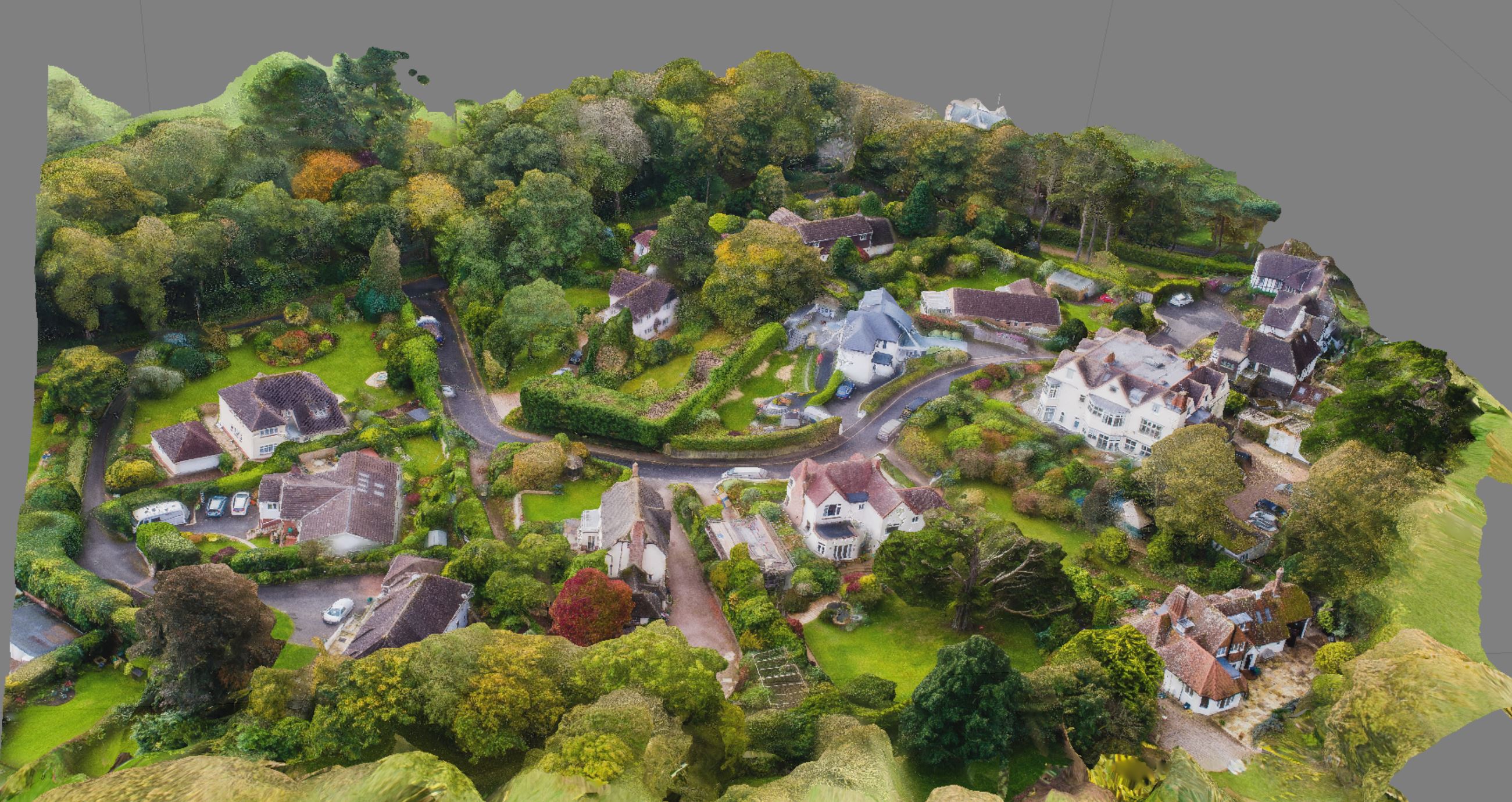 This Model was created using a UAV to capture a series of images. Post processing of this model the produced an exportable 3D model. This could only have been captured using a UAV due to the hazardous mus surrounding the wrecks. This also caused no disruption to the sight which can some times be invaluable to sited of historic value.

We recently did the aerial video work for a film by Simon Vacher called "Working The Sea" Filmed around Sidmouth in Devon. this follows follows the fortunes of the Bagwells, a Sidmouth fishing family from the forties when young Stan was fishing with his father in a borrowed boat, to the nineties when they have two fish shops, two trawlers fishing out of Brixham, and three boats working off the beach at Sidmouth. A Butterfly Effects Film for Sidmouth Coastal Community Hub CIC

This recent set of photographs was for the Duchy Of Somerset. The photographs covered some of the property's on the estate. The only way to show these property's and the surrounding countryside was from the air. 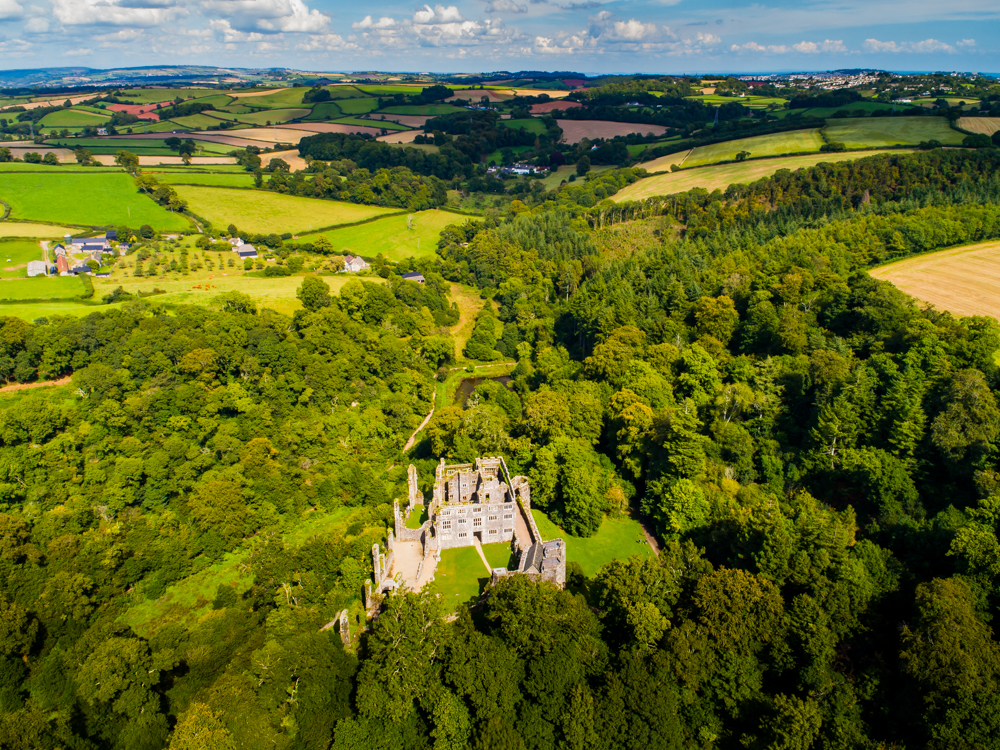 We have the ability to fly with a high degree of precision INDOORS. Flying between a roof and machinery indoors allowed a unique perspective of the production lines of Victorian Slider. We also covered the static video and editing for this promotional video which was shown at the NEC on a large 9 screen display on their stand.

A New Addition to Our Crew

We would like to welcome aboard Simon Vacher to our Crew. UAV filming is not just about piloting skills but you also need a Professional Camera Man. The whole production depends on great cinematography and all of the technicalities of video production and post production. Simon's expertise in the field of cinematography also opens a wide range of digital media. Simon has trained up a second operator controlling the camera set up, production and shooting. His web page can be found at: http://www.simonvacherfilm.com/.

About Our Camera Operator and production Editor

Simon Vacher has travelled the globe extensively on some of the most adventurous, remote and ambitious documentary programmes recently to appear on TV for National Geographic, BBC 2 and BBC4. He also shoots regularly for independent production companies commissioned by independent channels such as Channel 4. Highlights include filming in Antartica, the Falklands, the Indian Ocean and dramatic UK locations such as Lundy Island. Previously, Simon has worked across a wide range of digital media, including motion graphics, video editing, live event camerawork and corporate media, giving him a modern and rounded approach and understanding of how every stage of production works, from scripting, to shooting to editing and delivery. Simon is a real people person, often working with presenting and contributor talent whilst offering the skills for more adventurous remote location shooting and cinematography.

Maximise you viewings for property sales

part of a portfolio for an estate agent 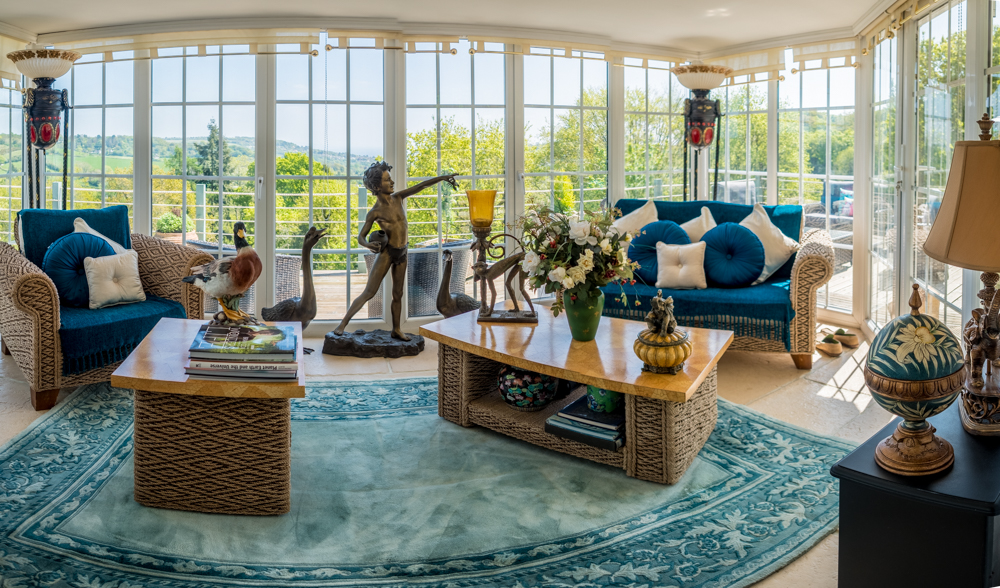 Killerton Roof Appeal. This is shot in 4k as part of an awareness campaign for Killerton House in Devon. All of the staff from Killerton as well as Pupils from Broadclyst School. This was shot in 4k.

The internal shots for this property were taken using High Dynamic Range (HDR) technique. HDR images can represent a greater range of luminance levels than can be achieved using more 'traditional' methods, such as many real-world scenes containing very bright, direct sunlight to extreme shade. For this shoot 7 images were taken and post processed in Adobe to create 1 photograph. The result is everything from the window view to the dark corners of the room are equally exposed. Some of the panorama shots are a total of 28 photographs stitched together. We can help show your property to its full potential call us today on 01392 460230

This video has been edited with 5 different cameras and separate audio. Post production is all done in house Including audio.

This is a local group based in Exeter Devon who commissioned us for a music video. They describe their music as Americano didgryBlues. This is a very unique sound. This was shot using 4 static cameras and separate audio recorder. The aerial shots were taken with one of our UAV's. All post production is done in house.

Some out takes from a recent project with Exeter University for their web site and brochures. Taken with an S1000 and Lumix gh4.

This project was for Origin to showcase their BI folding doors. Working with Utopia Studios who shot and edited the video. Ewins Aerial produced the aerial footage to give a modern and dynamic edge to this video. The use of the UAV enabled the product to be shown from meters away to 500 meters away in a single shot. This gave a sense of scale and showed the location to full effect which would not have been achievable with any other method. 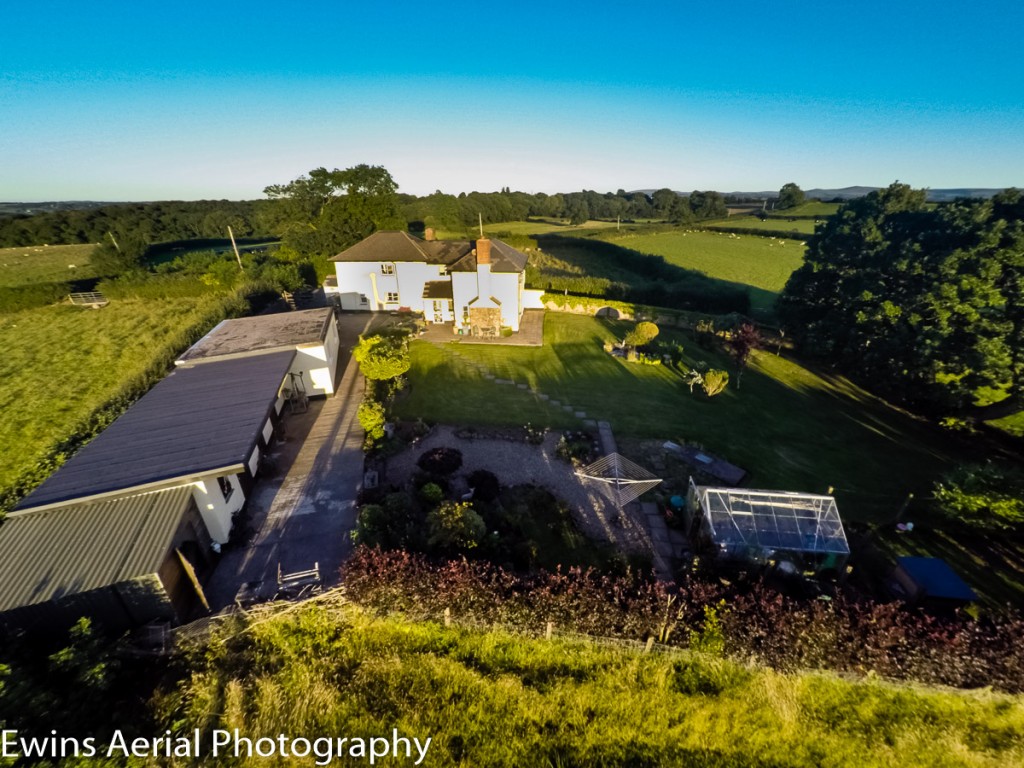 This project was for a Property owner who was struggling to showcase his house. We were able to photograph the property from the air to show not only the location but also the surrounding area in all of its splendor. We can also do the interior photography as well in one visit. We use the latest cameras and multiple flashes to light up the dark corners of a property. Multiple photographs are stitched together to give a panorama of your rooms to show it to its full potential. We can even offer a full dedicated web page showing your property using large full size photographs. http://ewinsaerial.uk/wingate/ 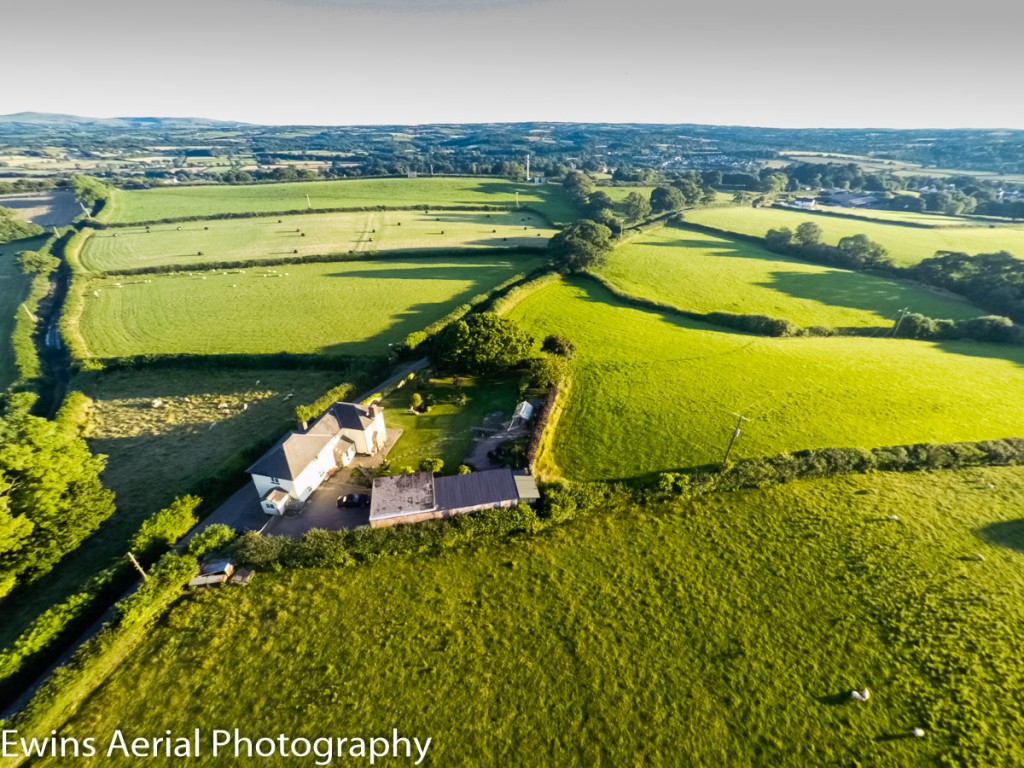 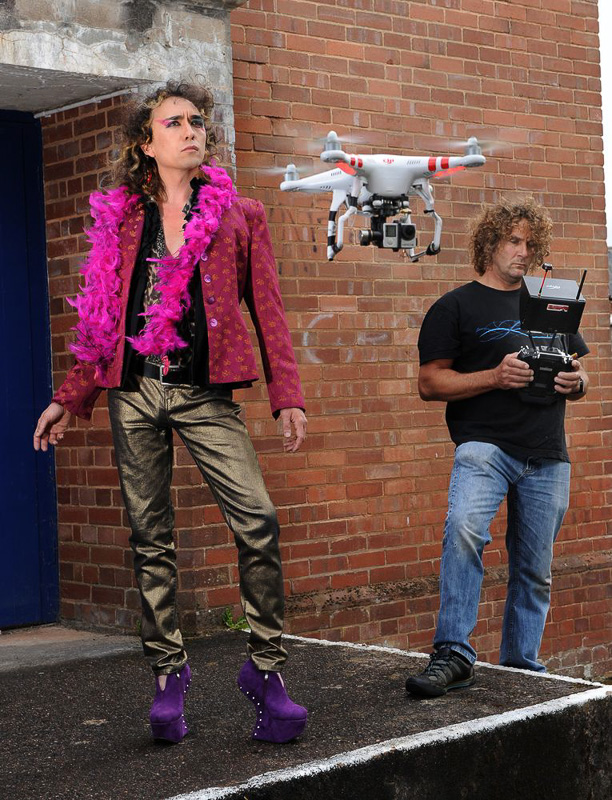 This shoot enabled overhead shots with out the need for the usual Crane and Dolly.

Filming On An Indoor Video Set 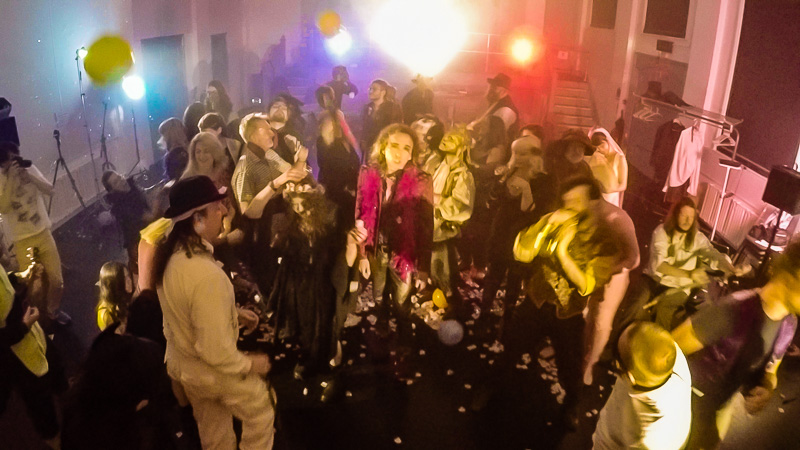 The UAV was used instead of a crane for this shot

Filming On Location for an Upcoming Movie “Hells Bells” 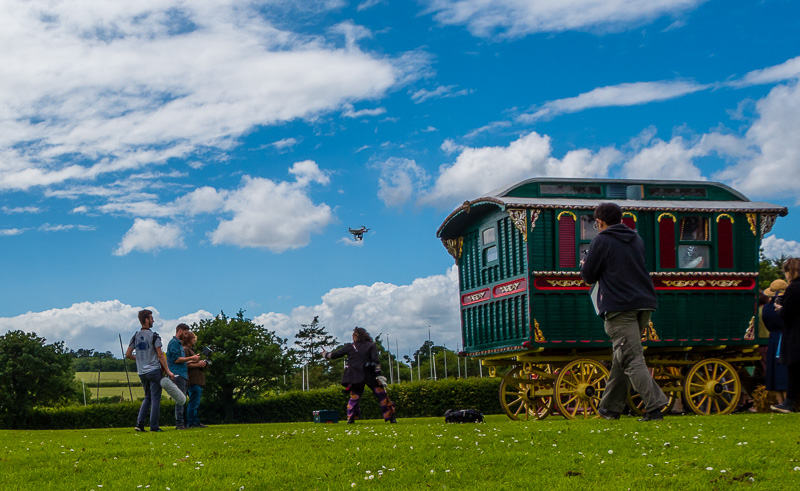 Filmed in 4K on Location In Devon 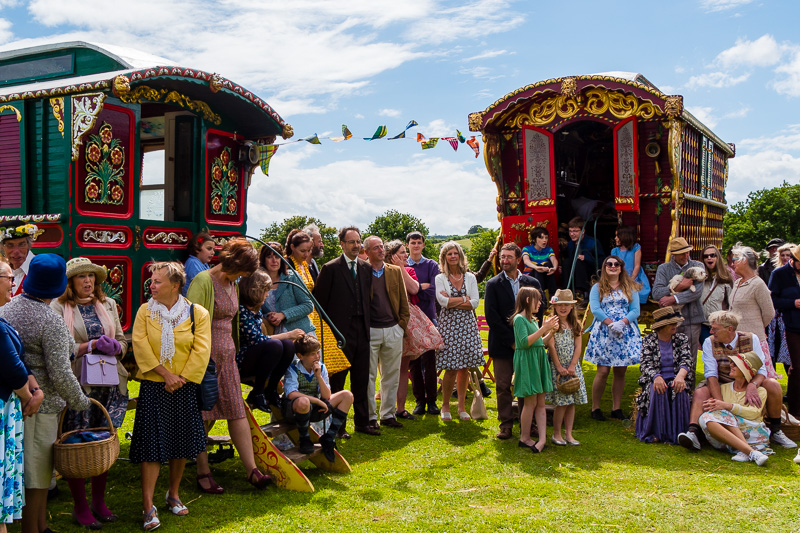 Screen Capture from UAV on Location 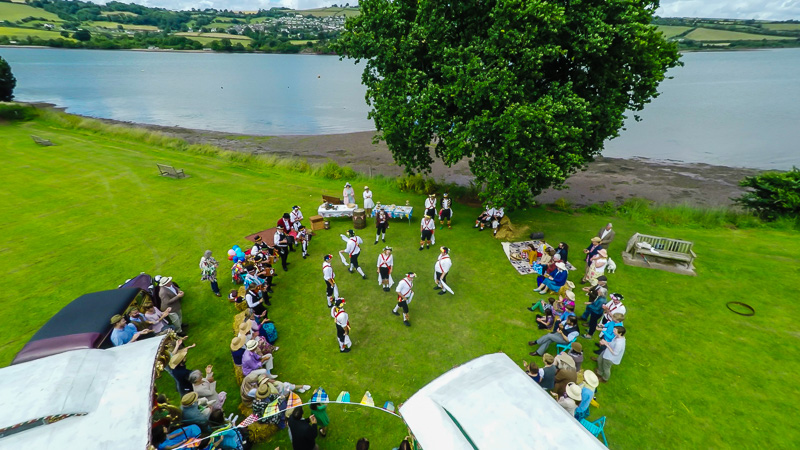 We are not just an Aerial filming unit. This video was filmed using a Octocopter, dji phantom. Sony static camera on a tripod. Drift head camera and a Sony camera and lighting set up taken into a caving system. We can are a one stop shop for all of your video needs. 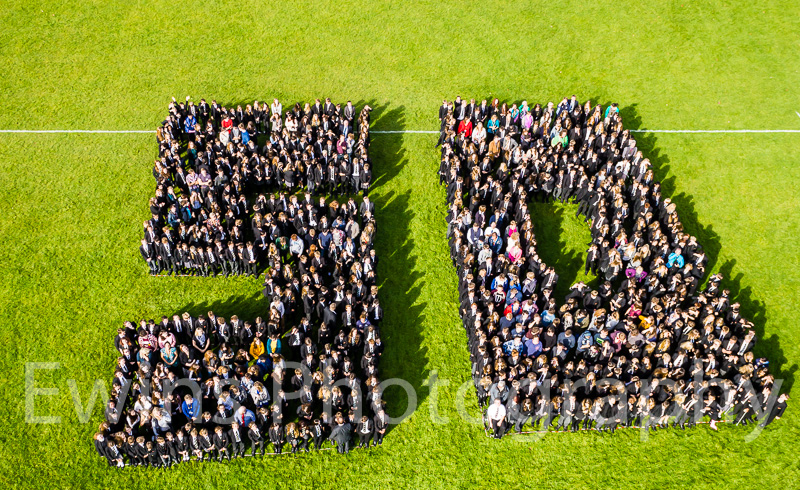 River Exe in Devon looking towards Exmouth and Topsham: The finished project was a wall canvas

View from above the river Exe devon looking south towards Exmouth

Wedding Photography for that unique view 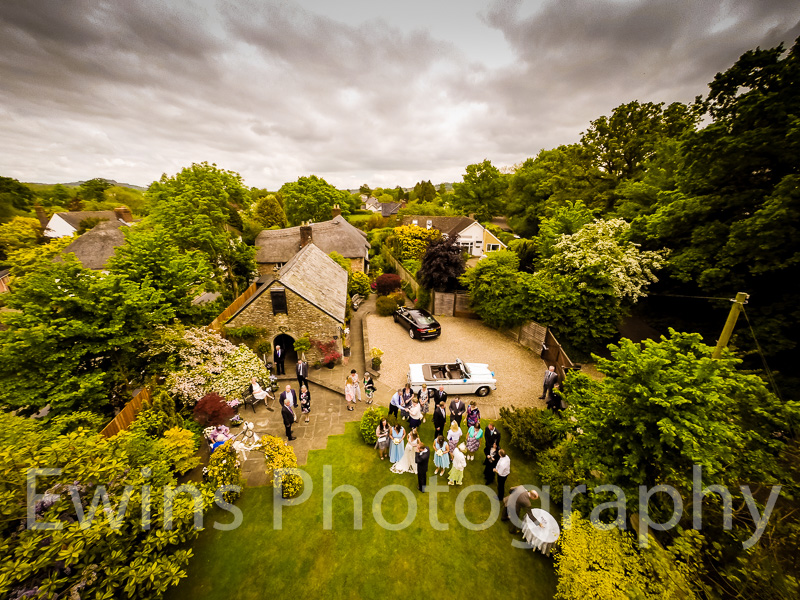 We have now started to incorperate Aerial Photography into Ewins Photography Wedding Photgraphy. 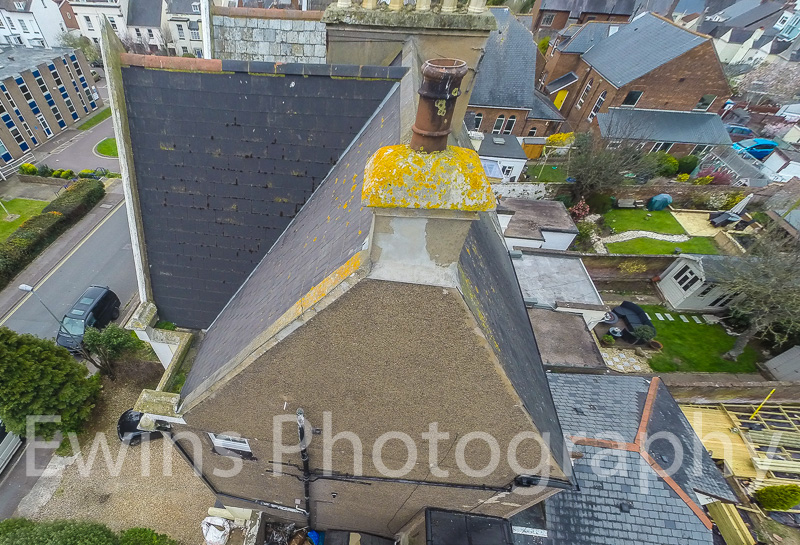 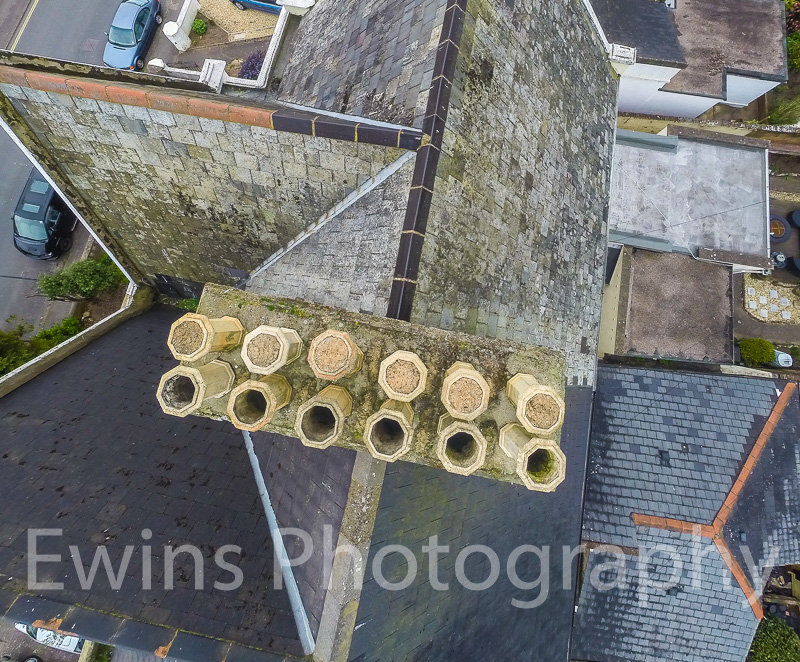 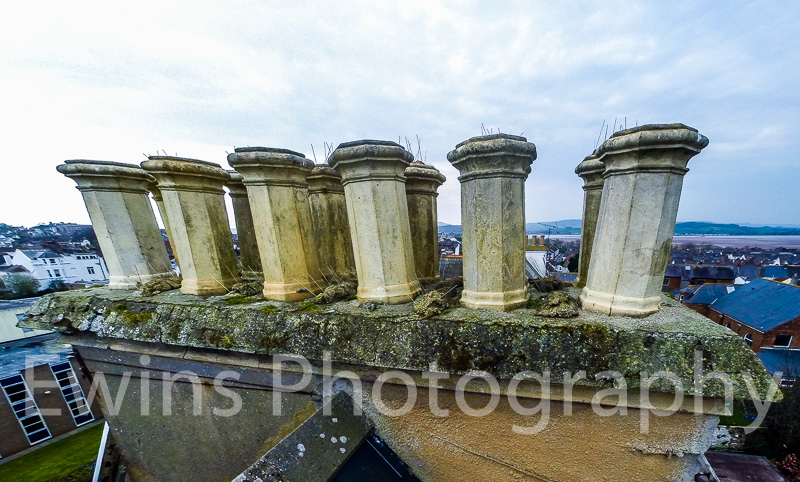 This recent chimney inspection was undertaken for a client who needed to inspect the structural integrity of a chimney on a three storey house. The only other alternative was for scaffolding of the three stories. This was cost and time prohibitive as the drilling into the building for securing the scaffolding. With our UAV we were able to get up close and take high resolution photographs without structural damage to the building and minimal disruption. The photographs were instantly available for inspection with the client having a live view of the inspection. This project had a large saving in time, safety and cost.

call to discuss your projectContact us now